Mothia and the Salt Marshes

Mothia (also called Motya or Mozia) is one of the world’s most ancient Phoenician settlements.
Situated in a fortunate position along the trade routes of its era, it became a rich and powerful centre in the space of just three centuries. It also benefited greatly from the morphological features of the site. Indeed, the Laguna dello Stagnone (Stagnone Lagoon), sheltered between the Isola Grande (Big Island) and the Coast of Sicily, made a safe, protected mooring place. In the middle, the island of San Pantaleo offered further protection.
Today, the entire lagoon is part of a protected nature reserve. Thanks to careful excavation works, visitors can see the walls, the “tophet” (open-air sanctuary with a sacred burial ground) and the dry dock (or “cathon”) of the ancient town of Mothia.
The museum, founded on the island by Joseph Whitaker, displays over 10,000 artefacts including an ancient Greek statue of Auriga the Charioteer (fifth century BC).
The salt marshes and the picturesque windmills add yet another important element to this rich and varied setting.
The Saline (salt marshes), which are believed to be the oldest in Europe, stretch along the entire coastline between Trapani and Marsala. Much of this region is now protected thanks to the establishment of a nature reserve.
Within this protected area, it is also possible to visit a typical local salt 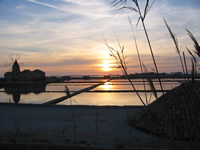